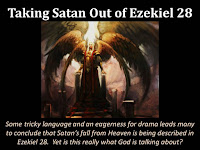 Ezekiel 28:13 – Thou hast been in Eden the garden of God; every precious stone was thy covering, the sardius, topaz, and the diamond, the beryl, the onyx, and the jasper, the sapphire, the emerald, and the carbuncle, and gold: the workmanship of thy tabrets and of thy pipes was prepared in thee in the day that thou wast created.

Eden – figurative or literal is the next issue that David B. Curtis, of Berean Bible Church, has been speaking on, this February 1st 2015, on his part 2 message of Spiritual Warfare.

could easily be speaking of Tyre in which he was born into the position he has once held.

– To whom art thou thus like in glory and in greatness among the trees of Eden? yet shalt thou be brought down with the trees of Eden unto the nether parts of the earth: thou shalt lie in the midst of the uncircumcised with them that be slain by the sword. This is Pharaoh and all his multitude, saith the Lord GOD.

, in context, where we do not let one verse speak by itself but instead read some of the other verses before it to hopefully get a clearer picture on what might is being said, for it is not always good to read the conclusion first, which most of us tend to do at times, because it might make us miss what is really being said. So, to get a better idea what is being said in Ezekiel 312:18, it is best for us to read verses 2-18, or even better yet the whole chapter:
Egypt will Fall Like Assyria – Ezekiel 31 KJV
How can “all the trees of Eden, that were in the garden of God,” have envied him if this was spiritually speaking about a fallen angel who goes by the name of Satan? Or, how can this Satan be delivered into the hands of the heathen who is “a person who does not belong to a widely held religion,” as in one who does not worship the one and only true God, in order to be judged? Is not this Satan the worst of them all by what we have been taught about him?
If it was not for verse 18, we might never have known really who it was speaking about who is none other than “Pharaoh and all his multitude” who has been judged by God through another nation that was being used as His instrument to bring forth the judgement.

“To whom art thou thus like in glory and in greatness among the trees of Eden?” Ezekiel 31:18a

“…the other trees in Eden the garden of God that envied Pharaoh, must be understood as other competing and less powerful nations and or rulers.” [by James R. Brayshaw in his vol. 1 page 256 Satan, Christianity’s Other God]
Was the king of Tyre in Eden?
So, why was the king of Tyre said to of once been in Eden which most fallen angels supporters claims is spiritually speaking of Satan?
If we are only diligent enough, we will notice that the Bible does list other references also speaking about Eden which can only be fully understood when read as a metaphor like what happens when reading poems at times.
Other Scriptures, which speaks of Eden, includes:
These verses could easily be stating that a nation had things going very well for them for that split moment in time.
When it comes to Pharaoh, that Ezekiel 31 was speaking about,  John Gill thus shares:

So, I end by asking, how can this be speaking about the imaginary satan many in churches these days claims it is talking about?

June 17, 2017
Sons of God – angelic beings or human beings? Sons of God – Are they Angelic Beings or Human Beings David Curtis, of Berean Bible Church located in Virginia, is teaching the Scriptures, verse by verse, in the book of Ephesians at this time and is in chapter 6 speaking of spiritual warfare. Many use the  Eph. 6  passages to support their theory that we are wrestling against demonic forces but that is not what is really being spoken of in this message since most Preterist believes that the imaginary devil has been defeated, according to  Hebrews 2:14 , and is now either annihilated or in the lack of fire. AUDIO CKIP Sons of God – Genesis 6:2 – Q & As BBC Jan 25, 2015 What is being said in this message is that the “sons of God” is referring to “angelic beings” and David has listed three statements on views, that some, Preterist might hold today: Last week we started a series on spiritual warfare, and we looked at three positions that are held by believers on Satan
Post a Comment
Read more
June 17, 2017
Sawtawn (Satan) In Job Sawtawn “…the word “Satan” in the original Greek and Hebrew,  both in the Old Testament and the New,  comes from the same word.” As I stated earlier, of the 19 times that the word “sawtawn” is transliterated as “Satan,” 14 occur in Job. We will have to read those 14 passages in order to understand who or what caused all of Job’s trouble. In the modern churches, it is common teaching that this fallen angel, this supernatural, angelic being, called “Satan,” was responsible. There was a man in the land of Uz, whose name was Job; and that man was perfect and upright, and one that feared God, and eschewed evil. And there were born unto him seven sons and three daughters. His substance also was seven thousand sheep, and three thousand camels, and five hundred yoke of oxen, and five hundred she asses, and a very great household; so that this man was the greatest of all the men of the east. And his sons went and feasted in their houses, every one his day; a
Post a Comment
Read more