Sons of God – Are they Angelic Beings or Human Beings 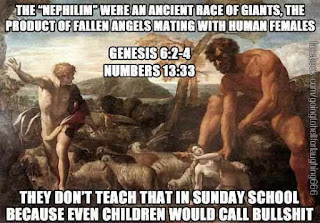 David Curtis, of Berean Bible Church located in Virginia, is teaching the Scriptures, verse by verse, in the book of Ephesians at this time and is in chapter 6 speaking of spiritual warfare.

passages to support their theory that we are wrestling against demonic forces but that is not what is really being spoken of in this message since most Preterist believes that the imaginary devil has been defeated, according to Hebrews 2:14

What is being said in this message is that the “sons of God” is referring to “angelic beings” and David has listed three statements on views, that some, Preterist might hold today:

For when they shall rise from the dead, they neither marry, nor are given in marriage; but are as the angels which are in heaven.

Better yet, if it is claimed that the flood happen so that God could rid of the giants brought about by those supposed angelic beings by getting women, of the daughters of men, who was of the people in the line of Cain, pregnant, why does God say in Genesis 8, after the flood, that he will never again curse the ground or destroy every living thing despite how wicked the hearts of humanity might be?

“I will not again curse the ground any more for man’s sake; for the imagination of man’s heart is evil from his youth; neither will I again smite any more every thing living, as I have done.” (Gen. 8:21b

For if God spared not the angels that sinned, but cast them down to hell, and delivered them into chains of darkness, to be reserved unto judgment;

So, if they were angelic beings, they could easily come back the second time around and have even better assurance that the next bunch will not die because they are doomed to hell anyways so why would 2 Peter 2:4

scare them if they are going to hell anyways.
Something to really think of…
Angelic beings who are going to hell anyways, God chains a few of them up so the others, who are already going to hell, will be scared to not do what the other bunch has already done. If I was one of those angelic beings, I would be assured that there would not be another flood and do it again anyways since I would be doomed anyways, but thank God I am not one of them and most of all thank God that those so called fallen angelic beings do not even exist.
Conclusion
The only way to support the angelic being theory, in the Genesis 6:2

passage, is very much brought about through “proof-texting” which is a “…harmfully common practice of finding a single verse or two that seems to support a belief and doctrine, then using the verse to support your view.” [Source: James R. Brayshaw – imaginenosatan.com Vol. 3 pg. 19]
All because a passage says “sons of God” it does not mean we can call that speaking of angelic beings because when we read the whole chapter, or verses before and after the chapter, we can easily come to the conclusion that ir was simply speaking of mortal human beings in a figurative, poetic, or metaphoric manner.
As David B. Curtis would always say “context is king” – “We must remember the hermanutic principle: context is king. This verse didn’t just drop out of the sky, and it must be studied in light of its context.” [Source: All Things? Romans 8:28

Delivered 12/04/2011]
By holding to “context is king” it totally annihilates the theory that the sons of God, in Genesis 6:2

, was angelic beings and brings us to the correct notion that it was speaking of the line of Seth.
Resources:

June 17, 2017
Sawtawn (Satan) In Job Sawtawn “…the word “Satan” in the original Greek and Hebrew,  both in the Old Testament and the New,  comes from the same word.” As I stated earlier, of the 19 times that the word “sawtawn” is transliterated as “Satan,” 14 occur in Job. We will have to read those 14 passages in order to understand who or what caused all of Job’s trouble. In the modern churches, it is common teaching that this fallen angel, this supernatural, angelic being, called “Satan,” was responsible. There was a man in the land of Uz, whose name was Job; and that man was perfect and upright, and one that feared God, and eschewed evil. And there were born unto him seven sons and three daughters. His substance also was seven thousand sheep, and three thousand camels, and five hundred yoke of oxen, and five hundred she asses, and a very great household; so that this man was the greatest of all the men of the east. And his sons went and feasted in their houses, every one his day; a
Post a Comment
Read more
June 17, 2017
Eden – figurative or literal in Ezekiel 28 & 31 Ezekiel 28:13 – Thou hast been in Eden the garden of God; every precious stone was thy covering, the sardius, topaz, and the diamond, the beryl, the onyx, and the jasper, the sapphire, the emerald, and the carbuncle, and gold: the workmanship of thy tabrets and of thy pipes was prepared in thee in the day that thou wast created. Eden – figurative or literal  is the next issue that David B. Curtis, of Berean Bible Church , has been speaking on, this February 1st 2015, on his part 2 message of Spiritual Warfare. AUDIO CLIP Eden – Ezekiel 28 & 31 – Q & As BBC Feb 01, 2015 Ezekiel 28:13  could easily be speaking of Tyre in which he was born into the position he has once held. Ezekiel 31:18  –  To whom art thou thus like in glory and in greatness among the trees of  Eden ? yet shalt thou be brought down with the trees of  Eden  unto the nether parts of the earth: thou shalt lie in the midst of the uncircumcis
Post a Comment
Read more